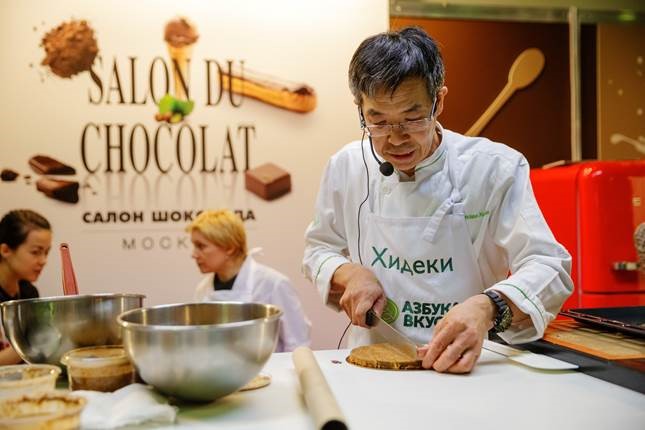 Messe Frankfurt to organise the Salon du Chocolat in Moscow

Messe Frankfurt is expanding its portfolio of trade fairs for the food industry and will organise the Salon du Chocolat Moscow under licence for the sector’s leading organiser, Chocoloco International SA. The trade fair is devoted primarily to chocolate and the raw materials for the production of cocoa, chocolate and confectionery. The Salon du Chocolat Moscow will open its doors from 19 to 21 March 2020.
Suppliers of cocoa and ingredients, chocolate manufacturers, retailers and customers from the hospitality industry meet at the Salon du Chocolat Moscow, the international trade fair for chocolate and confectionery. Private chocolate lovers are also welcome on the public day. The Salon has been held in Russia since 2006 and both representatives of artisan chocolate makers and the sector’s major players have been showing increasing interest in this annual sector event.

“The Salon du Chocolat is currently the only event in Russia devoted to the production of cocoa, chocolate and confectionery. At the same time, the market is developing in an extremely dynamic way”, says Wolfgang Marzin, President and Chief Executive Officer of Messe Frankfurt. Chocolate making has a long tradition in Russia with over 70 percent of the market being held by big domestic manufacturers.

Eugen Alles, Managing Director of the Russian subsidiary of Messe Frankfurt, adds, “Parallel to the growth registered by the big manufacturers, the segment of artisan manufacturers has also grown rapidly. The fall in cocoa bean prices had a positive impact on market developments in 2018. At present, we see that the sector is recovering slowly but surely from the crisis and I am confident that all market participants will be represented at our event. We invite everyone to take part in our festival of chocolate!”

The Salon du Chocolat in Paris celebrated its 25th anniversary in November, this year. Since the première, a total of 237 fairs have been held throughout the world. At present, the Salon is represented in 17 countries and 34 cities, including Paris, Lyon, Beirut, New York, Seoul, Hong Kong and Brussels. Gérald Palacios, CEO of Chocoloco International SA, welcomes the new partnership with Messe Frankfurt: “We are very proud to be cooperating with Messe Frankfurt in Russia, which is extremely well established in this market. Worldwide, the cocoa and chocolate market is growing. Therefore, our aim is to build up a global network covering all key markets and thus offer well known and lesser known brands better access to markets all over the world. Thanks to our profound knowledge of the market and sector, we can provide an unrivalled and wide-ranging platform offering both specialists and consumers a comprehensive trade-fair experience and introduce them to the various facets of this wonderful product.”

Chocoloco International SA supports Messe Frankfurt RUS with international marketing activities and new conceptual approaches. Both partners aim to contribute to the development of the sector in Russia. The next edition of the Salon du Chocolat Moscow under the auspices of Messe Frankfurt will be held at the IEC Expocentre in Moscow from 19 to 21 March 2020, concurrently with Modern Bakery Moscow, which opens its doors from 17 to 20 March 2020. Further information can be found at www.salon-du-chocolat.ru