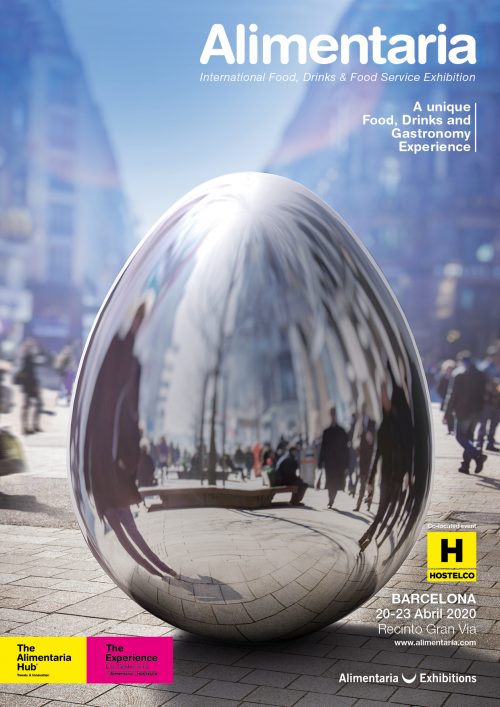 With six months to go until the start of Alimentaria 2020, the area that brings together the majority of the event’s foreign offer, International Pavilions, has already exceeded 60% of its sales, an unprecedented figure that doubles that reached in the same period of time in previous editions. In addition, Greece, Canada and Japan will première as exhibitors at the International Food, Beverages and Food Service Trade Show.

Alimentaria, which will be held from 20th to 23rd April 2020 at the Fira de Barcelona, has consolidated itself as a key global event for the food and beverage industry, so the International Pavilions trade show, which brings together the largest grouped offer of international products, attracts the attention of countries around the world. So although it is half a year away, Alimentaria is registering a significant increase in the rate of contracting international firms compared to previous editions.

As its director, J. Antonio Valls, points out, “Alimentaria is the leading event in this industry in Spain, but it has also been a world reference for years. In this sense, we have brought together professionals and companies from the five continents that have already reserved more than 60% of the available space, an indicator of the great interest that the event arouses across the globe.”

As a new development, Greece, Canada and Japan have confirmed that, for the first time, they will have a pavilion at Alimentaria. Greek companies will participate under the umbrella of Promo Solutions, the Canadian pavilion will be organised by the Canadian Food Exporters Association (CFEA) and Japanese companies will be exhibiting at Alimentaria 2020 under the Japan External Trade Organization (JETRO).

Among the official pavilions already confirmed and repeated at Alimentaria 2020 are those of the United States and Israel, which have increased their contracted surface area by 20% compared to 2018. Italy, Germany, Portugal, Belgium – which has a space for the Wallonia region and another for Flanders –, Romania, Poland, Morocco, Argentina, Ecuador, Colombia, China, Korea, Indonesia and Thailand are also participating again.

Europe, the most represented region

Europe was the most represented region, with a total of 500 exhibiting companies. Italy occupied the first position among European companies, with 122 direct exhibitors, in addition to companies grouped under the umbrella of institutions such as the Italian Chamber of Commerce in Spain (Camera di Commercio Italiana per la Spagna) and the Italian Agency for Foreign Trade (Agenzia ICE). Italy was followed by Portugal, Belgium, Germany and France. These five countries accounted for 47.1% of the sector’s total Spanish exports in 2018, according to FIAB.

Outside the European Union, the most represented country was China, with 106 participating companies. China is the seventh largest recipient of Spanish food and beverage exports, with 3.5% of the total, according to FIAB.

For their part, more than seventy Latin American firms participated in Alimentaria 2018, from Argentina, Ecuador, Peru, Mexico, Colombia, Dominican Republic, Costa Rica, Panama and Brazil. Latin America and the Caribbean are one of the preferred markets for the Spanish food and beverage industry, where it had a turnover of around €1.3 billion in 2018, according to FIAB.

22% of visitors are distributors and wholesalers

Alimentaria supports the internationalisation of a sector which, in Spain, has had one of its main pillars of growth in exports. As data from the Spanish Federation of Food and Beverage Industries (FIAB) points out, in 2018, these reached 30,470 million euros, almost double the 16,000 million recorded in 2009.

As María Naranjo, Director of Food, Wine and Gastronomy at ICEX España Exportación e Inversiones, explains, “Alimentaria is the perfect showcase for the Spanish agri-food offer for the rest of the countries. This is where companies from all sectors come together to be visited by professionals from all over the world. Presence at this event can become a lever that strengthens the company’s presence in markets where it already works and that opens up new opportunities and distribution channels in other countries.”