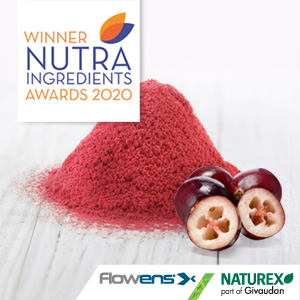 Flowens®, Naturex’s patented natural formula for urinary health, has been named Ingredient of the Year – Healthy Ageing at the 2020 NutraIngredients Awards.

Produced from a full-spectrum cranberry blend, Flowens® has been clinically shown to improve lower urinary tract symptoms (LUTS) in men at daily doses of 250mg and 500mg. The most common LUTS include difficulties associated with voiding the bladder and storage of urine. Prevalence increases with age: it is found among 26% of men in their 40s, and 90% in their 80s.

Following a recent clinical study, the use of Flowens® has been extended to women, with results showing improvement in overactive bladder (OAB) symptom at a daily dose of 500mg. OAB is the presence of urinary urgency, usually accompanied by frequency and nocturia (waking up during the night to urinate). Prevalence of OAB ranges from 9%-43% in women.

Dan Souza, Global Product Manager, said: “We’re delighted Flowens® has been chosen as Ingredient of Year – Healthy Ageing. The likelihood of being affected by urinary symptoms greatly increases as we get older. In fact, for many, suffering from bladder symptoms is not a matter of ‘if’ but ‘when’. Flowens® is a natural, clean-label solution for urinary symptoms that could improve the quality of life for millions of people worldwide.”

Flowens® is proven to be safe with no side-effects and is further supported by seven approved health claims related to prostate and lower urinary tract health – six from Health Canada and one from the Colombia National Food and Drug Surveillance Institute (INVIMA).

It is produced from sustainably grown cranberries sourced from a supply chain that has achieved Gold Status in the Naturex industry-leading Pathfinder program. It is also sold with a Naturex ID Pack to validate its botanical identity.

This is the second year in succession that Naturex has been a winner at the annual NutraIngredients Awards. In 2019, it won Botanical Product of the Year for an organic joint health shot made with TurmiPure Gold®, a turmeric ingredient offering unprecedented bioavailability at a low dose.